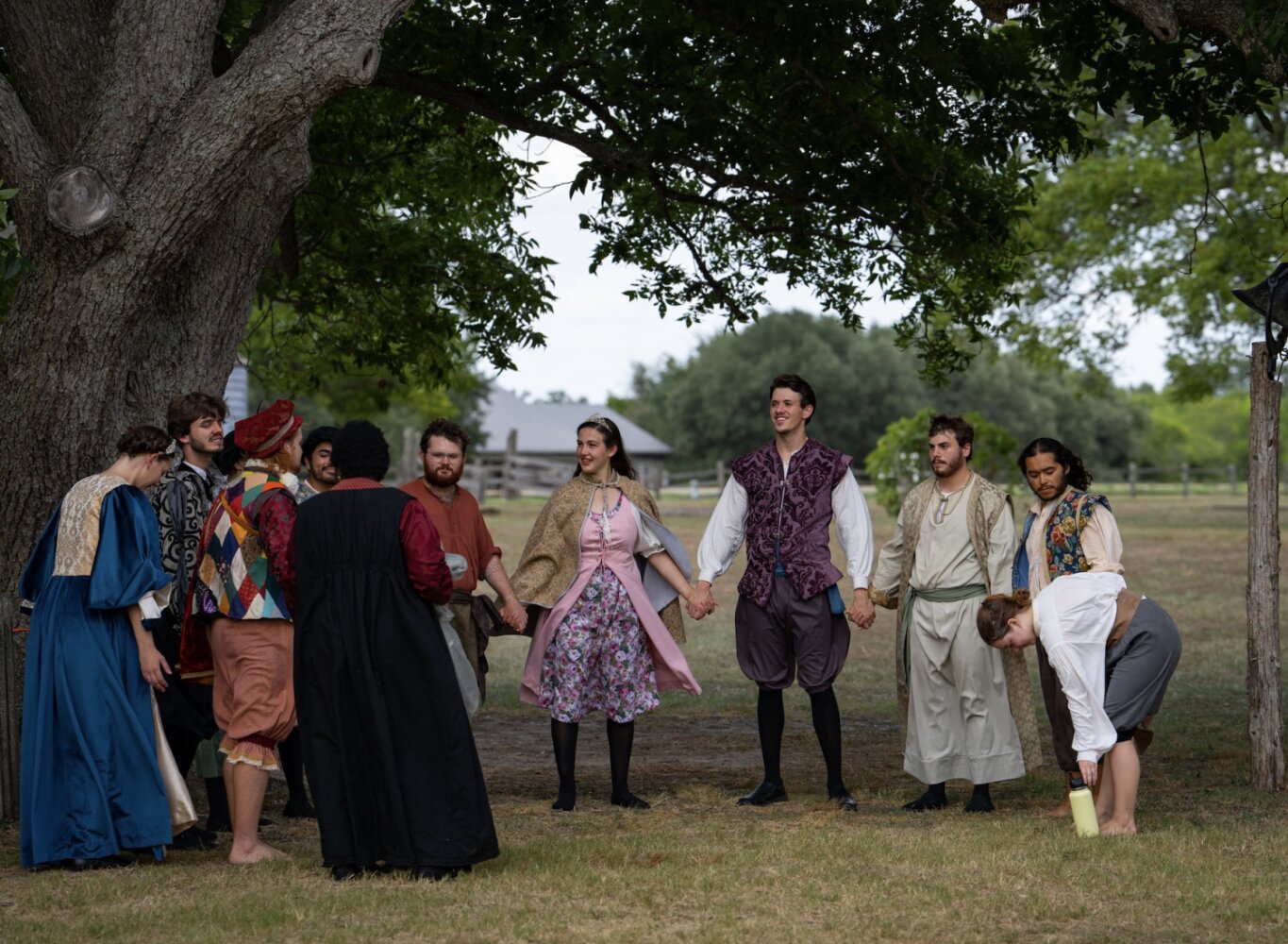 Shakespeare at Winedale Reflects on 2022 Programing

As fall gets underway, Shakespeare at Winedale is celebrating a successful 2022 season and beginning our fall programing. This has been a busy and productive year, packed with new challenges and endeavors.

The Shakespeare at Winedale summer program celebrated its 52nd season of exploring Shakespeare’s plays through performance in the historic Theater Barn at the UT Winedale Historical Center. Students in the program spent two months living in the Texas countryside, studying and performing plays in the Theatre Barn, a 19th-century hay barn that has been converted into an Elizabethan-style theater. This summer’s dedicated class offered joyous and inventive performances of Much Ado About Nothing, The Winter’s Tale, and The Two Noble Kinsmen in repertory. The public performance series was a great success, with visits from many alumni of the program from all over the country (and even two from the UK!) as well as from many longtime supporters and audience members. Shakespeare at Winedale is directed by Dr. James Loehlin of the Department of English and is supported by staff member Allison Dillon, who just completed her first summer as the new Program Coordinator.

The summer’s triumphs came on the heels of successful spring Shakespeare at Winedale semester course, which saw the completion of a unique two-year Global Virtual Exchange project funded by Texas Global.  During the spring semester, students in the Winedale course made three weekend trips to Winedale to explore Julius Caesar, while also meeting weekly on Zoom to discuss and explore the play with a group of Shakespeare students at the University of Witswatersrand in Johannesburg, South Africa.  The project – titled “Global Shakespeares:  Connecting Students Across the Hemispheres” – began with the spring class of 2021 and a similar shared virtual exploration of The Tempest.  As part of the exchange, Shakespeare at Winedale Outreach Coordinator Clayton Stromberger was able to bring the Winedale approach to South Africa with a special two-week visit, which was followed by a visit by Wits University professor Chris Thurman to Texas to observe the Shakespeare at Winedale program in action.  You can find Dr. Thurman’s online account of these two learning adventures here and here; a sampling of some of the collaborative UT-Wits work from the spring 2021 semester can be found here.

This summer marked the 22nd anniversary of Camp Shakespeare at Winedale. To celebrate, twenty-eight students from across the country, ages 11-17, gathered together at the historic Winedale Barn to joyfully resume the in-person exploration of Shakespeare through performance. Recently appointed Director Robin Grace Soto and Director of Mission Doc Ayres selected As You Like It and Macbeth for the summer season.  Additionally, Take Pains, Be Perfect, the documentary film about Doc and the Camp Shakespeare and Shakespeare at Winedale programs held its premiere at the 2022 Santa Fe Film Festival on February 5th.  The film is currently being shown on PBS stations across the country and can be viewed through your local PBS streaming services. TPBP has also been selected for a screening at the Dallas Film Festival in October.