How Have Changes in the Labor Market Contributed to Increases in Suicide and Drug Poisoning Deaths Among Men in the United States?

How have changes in the labor market contributed to increases in suicide and drug poisoning deaths among men in the United States?

Over the last two decades in the United States, deaths from suicide and drug poisoning have risen rapidly for men without a college degree. Many have argued that changes in the U.S. labor market play a central role in these mortality patterns. In particular, the loss of good-paying blue-collar jobs has increased inequality, job insecurity, and physical and mental health problems among U.S. workers. These challenges can feed into feelings of hopelessness and despair which in turn increase vulnerability to suicide and drug poisoning deaths.

However, these men entered early adulthood during the 1980s, when the labor market share of blue-collar jobs (that is, the percentage of blue-collar jobs) and average wages of these jobs were already steeply declining. The resulting labor market diverged: non-college educated workers dominated low-wage positions while middle-class lifestyles were reserved for those with a bachelor’s or advanced degree.

In other words, just as these youngest male Baby Boomers entered the labor force, the labor market shifted to prevent many men without a college degree from attaining the good-paying blue-collar jobs that they had expected to fill.

This research brief reports on a recent study1 in which the authors investigate whether thwarted occupational expectations among men contribute to suicide and drug poisoning deaths in a shifting economy. They use newly available longitudinal data that allows them to examine adolescent occupational expectations before the labor market shift took place and risks of suicide and drug poisoning mortality after that shift.

The data come from High School & Beyond (HS&B), a large nationally representative panel survey in which high school sophomores and seniors were interviewed in 1980 and then again several times until 1992. The authors focus this analysis on men because they were more likely than women to have expected the blue-collar jobs that declined in labor market share; they are also more likely to die by suicide. The HS&B data were then linked to adult mortality records to determine who in the sample died between ages 25 and approximately 50, as well as the cause of death. Of the 11,720 men used in the analysis, approximately 60 died by suicide and 40 died by drug poisoning. (Note: for confidentiality reasons, reports of deaths are rounded to the nearest 10.) 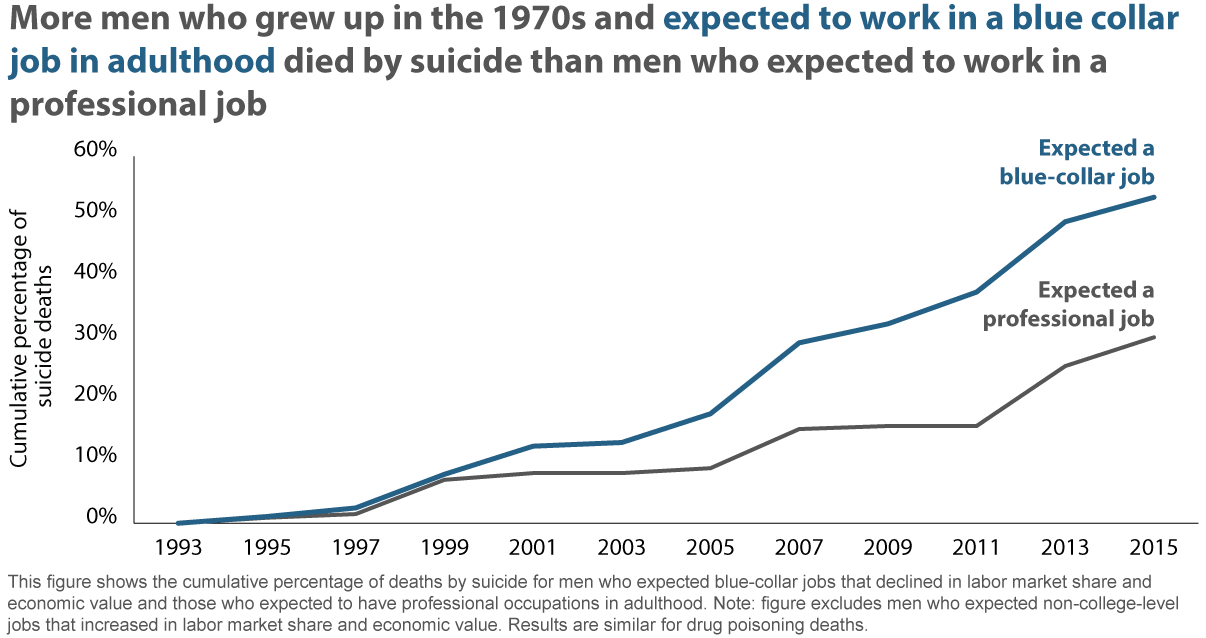 These findings have important implications for suicide prevention and mental health promotion. For example, educational training to prepare people to adapt to labor market changes may be a key, but generally overlooked, tool for suicide and drug abuse prevention. Other tools include robust welfare programs and improved unemployment benefits.

As technology increasingly makes certain sectors of the labor market obsolete, we need to prepare adolescents for the uncertainty of occupational opportunities in adulthood by training them to develop flexible skills that can be used for a wide range of future opportunities.

In addition, for adults facing occupational declines, new skills training will not be enough to protect

them from the risks of suicide and drug poisoning. Training programs must also include a focus on how these occupations define their identities and ideas of where they fit in the world. Expanding training programs to include this broader range of skills could serve to reduce mortality risks for those in vulnerable occupations so that all people can survive, and potentially thrive, in an ever-changing economy.

Jamie Carroll (jmcarroll@utexas.edu) is a study director at the Texas Behavioral Science and Policy Institute at the Population Research Center, The University of Texas at Austin; Alicia Duncombe is a PhD student in sociology at UT Austin; Anna S. Mueller is Luther Dana Waterman Associate Professor of sociology at Indiana University; and Chandra Muller is a professor of sociology, Alma Cowden Madden Centennial Professor and Ashbel Smith Professor in Liberal Arts at UT Austin and a faculty scholar in the Population Research Center.