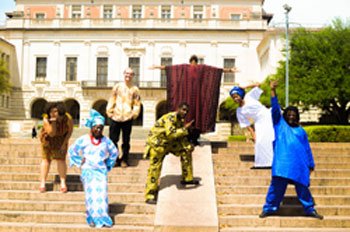 The Yoruba Studies Program fosters an understanding of Yoruba politics, aesthetics, and spiritual cosmology that is diasporic in focus.  Not only is Yorubaland of Nigeria considered, but Brazil, Cuba, Trinidad, Benin, the United States (particularly in Miami and New York City), and Puerto Rico are positioned as integral components of any contemporary understanding of Yoruba reality.

History of the Program

Yoruba Studies at UT began as a student-driven initiative from the African Student Association (ASA) in collaboration with the John L. Warfield Center for African and African American Studies. ASA and the Warfield Center were concerned about the absence of instruction in indigenous African languages at UT.  The students circulated petitions, consulted with faculty, met with administrators and, eventually, the Yoruba Studies Program was born in 2002.  Dr. Akin Alao of Obafemi Awolowo University (Ile-Ife, Nigeria) was hired to teach Yoruba Language as well as Yoruba History and Culture.  When Dr. Alao returned to OAU, Dr. Fehintola Mosadomi from Tulane University was hired to teach the Yoruba courses.  Dr. Omoniyi Afolabi was hired to supplement the language instruction, and to teach courses  on the Yoruba presence in Brazil along with Lusophone African literature. The other Yoruba Studies faculty include Dr. Toyin Falola, who teaches courses in Yoruba history; Dr. Jossianna Arroyo-Martínez, who teaches literature courses with Yoruba diasporic content; Dr. Moyo Okediji, who teaches Yoruba visual aesthetics; Dr. Oladotun Ayobade, who teaches Yoruba language and performance studies; and Dr. Omi Osun Joni L. Jones, who teaches courses in Yoruba theatrical and ritual performance.

Undergraduates who want an official recognition of their work on Africa, including Yoruba studies, can earn an African Studies certificate that will appear on their transcript. The certificate program requires 18 hours of coursework, and any courses on the subject of Africa can be applied to completion of the certificate. Find out more information on the African Studies Certificate page and get in touch with the AADS Advising Office (afr@austin.utexas.edu).