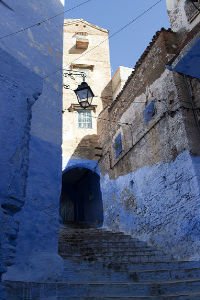 The Arabic Flagship Program (AFP) is a merit-based undergraduate course of study designed for learners of Arabic who seek to achieve professional working proficiency while pursuing the majors of their choice. Flagship students study Arabic throughout their domestic studies at UT Austin before pursuing the AFP "Capstone Year" in Morocco with the goal of reaching "Superior" proficiency.

The AFP at the University of Texas at Austin is one of five Arabic Flagships in the United States and currently has approximately 80 participants, or AFP scholars, in the program. Our AFP scholars come from all regions of the nation and diverse backgrounds, including heritage and non-heritage speakers. Because the AFP curriculum allows its participants to pursue the major of their choice while simultaneously completing program requirements, AFP scholars represent a broad range of the larger university student population, bringing to our program a variety of academic interests, including political sciences, natural sciences, cultural studies, business administration and engineering. Students in our program graduate to pursue rich careers in a wide array of fields, including academia, national security, refugee resettlement, foreign affairs, non-profit organization, and many more.