This April, the Eric Williams Memorial Lecture (EWML) is moving from Florida International University to its new home at the John L. Warfield Center for African and African American Studies at The University of Texas at Austin. Founded in 1999, the series honors the late Dr. Eric Williams (1911-1981), scholar, statesman, and Head of the Government of Trinidad and Tobago from 1956 until his death in 1981. Williams authored Capitalism and Slavery (1944), the landmark study that has been translated into 9 languages, Spanish included (with a  Dutch translation forthcoming) and that is still widely read today. In the University of North Carolina Press edition of Capitalism and Slavery, Colin Palmer, late of Princeton University, describes the book as “a work of conceptual brilliance, intellectually mature, bold, incisive, and immensely provocative...” In a similar vein, Duke University professor William Darity has argued that, with Capitalism and Slavery, Williams “produce[d] a work that now has to be considered central in the historiography of slavery and abolition.” In November 2019, the International Museum of Slavery in Liverpool, England, celebrated the work’s 75th anniversary with an international conference co-sponsored by the University of Liverpool and the Thomas Jefferson Foundation.

Williams also authored a number of other books, among which were History of the People of Trinidad and Tobago (1964) and From Columbus to Castro: The History of the Caribbean, 1492-1969 (1971). 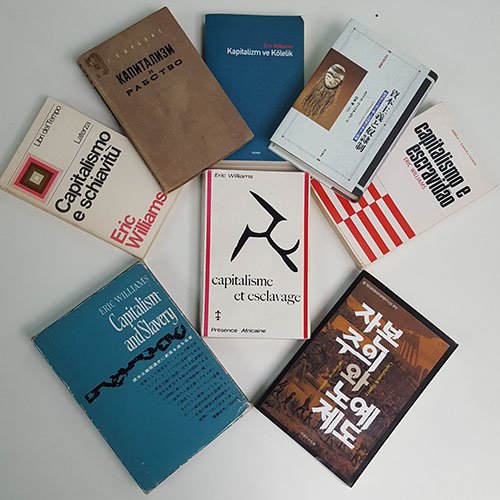 The Eric Williams Memorial Lecture continues in this legacy by hosting conversations about global activism and culture from Williams’s time to the present. The digital launch invites past lecturers of the series to reflect on Eric Williams’s legacy. Beginning Friday, April 9, with the release of a prerecorded conversation between Erica Williams-Connell, series co-founder and daughter of its namesake, and Dr. Arnold Rampersad, Sara Hart Kimball Professor in the Humanities, Emeritus, Stanford University. Williams-Connell is also the founding curator of the Eric Williams Memorial Collection Research Library, Archives & Museum at the University of the West Indies, Trinidad and Tobago.

The following weeks will bring interviews with EWML co-founder Dr. Carole Boyce-Davies, Frank H. T. Rhodes Professor of Humane Letters in the College of Arts and Sciences and Professor of Africana Studies and English at Cornell University (April 16); Professor Sir Hilary Beckles, Vice-Chancellor of the University of the West Indies (April 23); and Dr. Hollis “Chalkdust” Liverpool, Senior Academic Fellow at the University of Trinidad and Tobago and noted calypsonian (April 30).

Each video will be posted to the Warfield Center website at 12 PM CDT (1 PM EDT/AST) on release day. From that point on they will be free and accessible to all interested viewers.

Exhibition materials will be available in English and Spanish.

The EWML has moved to UT Austin with the generous support of Williams-Connell and Boyce-Davies in collaboration with Warfield Center affiliates Drs. Lorraine Leu and Minkah Makalani. The Warfield Center looks forward to building on the series’ illustrious history, which began with historian Dr. John Hope Franklin and continued with a roster of noted artists, activists, elected officials, and scholars from across the African diaspora over nineteen years at Florida International University.

The introduction of this series continues The John L. Warfield Center for African and African American Studies’ mission as the arts, culture, and programming division of the larger Black Studies community at the University of Texas at Austin. Since its inception at The University of Texas at Austin in June 1969, the Warfield Center has been a focal point for campus and community life. Its scholarship and cultural production draws on the expertise of its faculty affiliates in a wide variety of fields and disciplines, including education, history, literary studies, political science, social work, and communications, among others. The Center supports the research and programmatic initiatives of its faculty affiliates and students, collaborates with local organizations, and encourages creative work that seeks to foster social justice for people of African descent around the world.