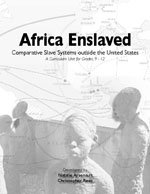 This unit explores comparative slave systems outside of the US, with particular focus on Latin America (Brazil and Haiti), Africa (the Swahili Coast), and the Middle East (Ottoman Egypt).

The subject of slavery is at once both fascinating and terrifying, revealing a sad and shameful chapter in human history, one that often provokes strong emotions and continues to have an impact in the socio-economic and cultural realms in many countries and cultures. Slavery in an institution with roots in the earliest recorded human histories. The Narmer Palette, arguably the oldest political document still in existence, dating from at least 3000 BCE, contains images of captives being paraded before a victorious king in a kingdom that existed in Egypt before Egypt itself. Despite the official abolition of slavery in every country on earth, contemporary slave systems can still be found worldwide.

Africa Enslaved was designed and developed over the course of nearly two years. Early in the design phase, we chose to focus specifically on historical examples of slavery in locations outside the United States. We chose historical examples in order to take advantage of the many excellent monographs and compilations of primary source documents that have been published on our chosen case studies. Our decision to exclude the United States from the unit stems from the fact that discussion of slavery forms an important component of American history courses, while slavery elsewhere is generally not a topic included in world history courses.

The UNESCO Map of the Slave Route includes a wealth of information combined into a unique document. Questions and comprehension exercises related to the case studies that follow are included with the map in order to help frame each in the context of the global phenomenon. Summary charts are included to help students organize their thoughts and raise questions as they complete the individual case studies, and also to provide guidance for independent research on U.S. slave systems.

The case studies themselves are organized in a Document-Based-Question (DBQ) style that guides students through a range of topics, including the legal status of slaves, slave labor, rights and responsibilities of slaves and slave-owners, slaves and religion, rebellions, runaways and emancipation, and abolition movements. An introductory reading provides the historical background for each case study, and an accompanying map provides a geographic context. Each unit also has a glossary of specialized terminologies used in the case study.

This unit is correlated to the Texas Essential Knowledge and Skills (TEKS) for World History and the National Standards for History. The unit is made up of 5 sections entitled, "Introduction and Maps," "Slavery in Brazil," "Slavery in Ottoman Egypt," "Slavery in Haiti," and "Slavery in the Swahili Emirates of East Africa."

Download the full unit (2.9 MB - not recommended for users with dialup or slow internet connections)