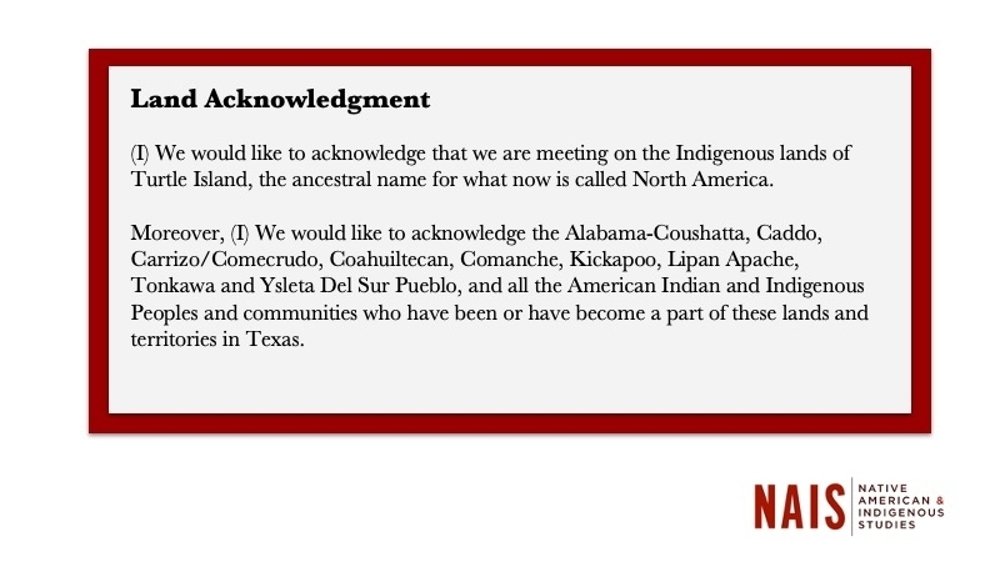 Program in Native American and Indigenous Studies (NAIS), The University of Texas at Austin

As the flagship institution in our state university system, it is important that The University of Texas at Austin demonstrate respect for the historic and contemporary presence of Indigenous Peoples in Texas and, particularly, in the greater Austin area. To that end, it is incumbent upon The University of Texas at Austin to recognize that our campus resides on what were historically the traditional territories of Indigenous Peoples who were dispossessed of their homelands. Land Acknowledgements are an expression of gratitude and appreciation to the Indigenous Peoples, the traditional caretakers of the land, for the use of their lands on which we work, study, and learn. In this spirit, we encourage all the faculty, staff, students, and guests of The University of Texas at Austin to open public events and gatherings with the following Land Acknowledgement, and/or to include this statement in printed materials associated with your events:

(I) We would like to acknowledge that we are meeting on the Indigenous lands of Turtle Island, the ancestral name for what now is called North America.

Moreover, (I) We would like to acknowledge the Alabama-Coushatta, Caddo, Carrizo/Comecrudo, Coahuiltecan, Comanche, Kickapoo, Lipan Apache, Tonkawa and Ysleta Del Sur Pueblo, and all the American Indian and Indigenous Peoples and communities who have been or have become a part of these lands and territories in Texas.

In recognition of the ongoing and cumulative challenges faced by Indigenous Peoples in Central Texas and globally, we call upon The University of Texas at Austin:

To repatriate the ancestral remains held by the Texas Archeological Research Laboratory to their Indigenous descendant communities and Native lands.

To commit to the active recruitment and material support of Native American and Indigenous students, who currently comprise fewer than 0.2% of UT Austin’s student body.

To support the transition of the Program in Native American and Indigenous Studies into a Center.

To establish a protocol of research and study on Tribal or Native lands, and to foster an ethics and practice of engaged scholarship, with and for Indigenous peoples and communities, locally and internationally.

Read our NAIS Academic Council Letter to the President in support of a UT Land Acknowledgement, here.