The Plan II-KIPP (P2K) partnership is a fantastic way to volunteer in the Austin community through Plan II and learn about education equity and policy. Plan II students serve as mentors for middle school and high school students in the KIPP Texas-Austin charter school system. Plan II offers two one-hour courses, and three programs of involvement (PlanTutoring, KAL, and Krewe). Students may choose to participate in more than one program.

A one-hour course offered in both Fall and Spring semesters. T C 126 is a year-long commitment and offers mentorship opportunities with the Krewe program at KIPP Austin College Prep.

Krewe: A mentoring program embedded in a year-long course that meets in both Fall and Spring semesters. This program is designed for students who want to delve more deeply into the inequities in the U.S. public education system while concurrently mentoring a 5th or 8th grade student from KIPP Austin College Prep. As a mentor, Plan II students will meet once a week to talk, play games, and provide a supportive role for their mentees.

Contact James Lemuel (james.y.lemuel@utexas.edu) or Eliana Salinas (elianasalinas@utexas.edu) if you have questions about Krewe.

A one-hour course offered in the Fall semester. T C 128K is a one-semester commitment and offers mentorship opportunities with the PlanTutoring and KAL programs.

PlanTutoring: Plan II students are partnered with small groups of high school students to provide support with college applications, share insights about the application process, and talk about the college experience.

Contact Courtney Huynh, Rohini Chahal, and Jasmine Wright (plantutoring@gmail.com) if you have questions about PlanTutoring.

KAL Mentoring: Plan II students are matched with a middle school student at KIPP Austin Academy of Arts & Letters, or KAL, to act as their mentor for a year or more. Mentors meet with their students once a week to play games, do crafts, or talk about life.

Contact Alisa Lu (alisalu144@utexas.edu) or Bella Plaza at (bellaplaza@utexas.edu) if you have questions about KAL.

Courses are led by Jill Kolasinski, KIPP Austin founder and former executive director, and give students a better understanding of KIPP, the public education system, educational equity, and how to be an effective mentor.

Jill Kolasinski is the founder of KIPP Austin Public Schools and served as its executive director from its establishment in 2001 until 2012. Jill entered education as a Teach for America corps member in 1994 in Houston, Texas; the same year that KIPP was launched as a pilot class in the Houston Independent School District. In 1995, she was a founding teacher at the KIPP Academy in Houston when Mike Feinberg started the school as a district charter. In 1999 she moved to Austin and taught in AISD for two years before becoming a Fisher Fellow and opening the first KIPP school in Austin, KIPP Austin College Prep. During her time as executive director at KIPP Austin Public Schools, she laid the groundwork to grow a network of KIPP charter schools in East Austin which will eventually serve over 5,000 students in ten schools. Jill continues to work with KIPP Austin Public Schools as a member of the board of directors. She has also served on the Education Service Center 13 board of directors and as an advisor to Austin Achieve charter schools, Magnolia Montessori for All charter school, and EXPLORE Austin. She is a graduate of Northwestern University and lives in Austin, Texas with her husband, Rip Esselstyn and their three children, Kole, Sophie, and Hope; and two dogs, Tug and Winter.

KIPP, the Knowledge is Power Program, is a national network of free, open-enrollment, college-preparatory public schools dedicated to preparing student in underserved communities for success in college and in life. There are currently 141 KIPP schools in 20 states and the District of Columbia serving more than 50,000 students.

KIPP builds a partnership among parents, students, and teachers that puts learning first. By providing outstanding educators, more time in school learning, and a strong culture of achievement, KIPP is helping all students climb the mountain to and through college.

In the spring of 2007, seventeen carefully selected and trained Plan II students embarked on a mentoring  partnership with KIPP (“Knowledge is Power Program”) Austin College Prep, a local middle school serving primarily low-income and minority students in Austin. Big Brothers Big Sisters of Central Texas facilitated matching each Plan II student with a “KIPPster” in an effort to form lasting bonds between mentor and mentee.

KIPP Austin was established to meet the needs and desires of the East Austin community where a lack of opportunity has traditionally impeded the path to college for the area's young people. KIPP strives to instill in its students a passion for academic success and an understanding that college is an attainable and valuable goal. Each Plan II mentor encourages this message through weekly trips to visit his/her mentee at KIPP and periodic group trips to the school. In addition to their mentoring relationship, Plan II students also become deeply immersed in issues related to equality of educational opportunity (or lack thereof) for historically underserved students, and in the KIPP model as a demonstrably effective strategy for addressing such issues.

About the P2K Founder

Grant Thomas is a career educator whose major focus for the past 32 years has been on systematic strategies for youth empowerment and service. He started the original PAL (Peer Assistance and Leadership) Program in Austin ISD in 1980, and guided its growth into a national model peer-mentoring program that has been implemented by hundreds of school districts throughout Texas and the nation. In 1994 he established YouthLaunch, an Austin-based youth empowerment nonprofit, and served as its Executive Director for nine years. A former board member of the National Association of Peer Programs, he served for eight years on the board of KIPP Austin. His educational background includes a B.A. from Princeton, magna cum laude (1967); an Ed. M. from Harvard (1974); and four years of graduate study in educational psychology at U.T. (1976-1980). 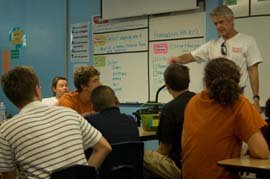 The Course in Context: A Model Program for Civic Engagement at Plan II

While its primary focus is on the mentoring partnership with KIPP, the course is part of a broader effort known as Plan II Praxis, whose goal is the development of a multifaceted, model program for civic engagement and service at Plan II.

In the service of this goal, it is our hope and intent that Plan II's partnership with KIPP can serve as a model for the development of additional Plan II partnerships with other organizations, addressing other service-related issues, opportunities and needs. What develops in this process can serve as an inspiration and resource to the broader student community at Plan II and UT, and perhaps as a model to other colleges and universities as well.